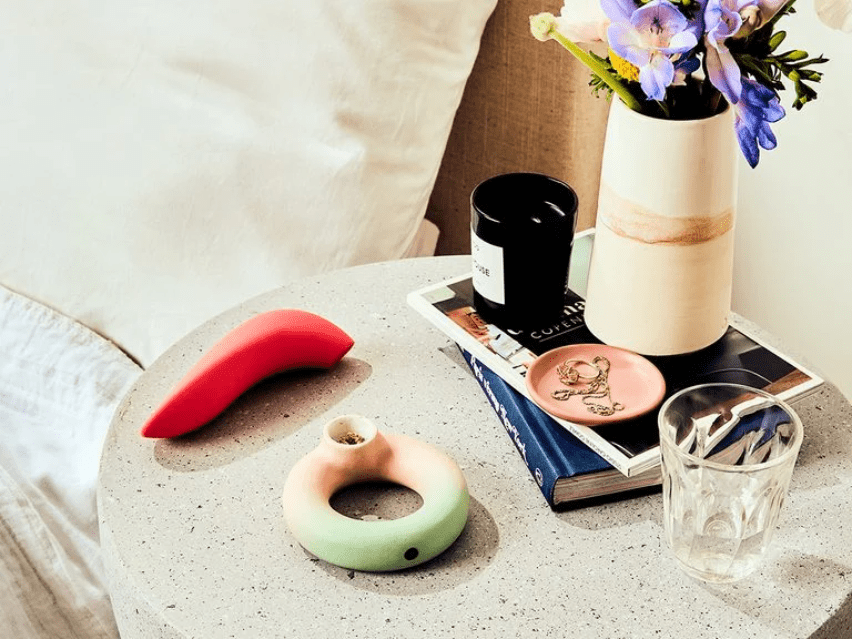 The first time it happened, I thought I’d imagined it. The occasion was a New Year’s Eve at home with my husband, Jason, but to make things a bit more festive, we took some cannabis edibles and settled in for a sexy, middle-aged evening of our favourite activity — watching BBC quiz shows. Except that’s not what we ended up doing, and we ended up not doing that for quite a long and unusually intense time.

“What was THAT?” he asked afterwards, shocked at abruptly being used so wantonly.

“I don’t know!” I said, my eyeballs still careening around my skull like a cartoon. “Could it have been…the weed?”

We laughed. As long-time cannabis connoisseurs, we’ve smoked a lot of pot in the 13 years we’ve been together, and it’s never had much of an invigorating impact on our love life. But this night was different, and the difference was with me. I was suddenly super sensitive to touch and unselfconscious about my jiggly post-kid bod, and — how do I put this politely? — I rang in the New Year several times with a ferocity I didn’t know I still possessed.

And then it kept happening. Every time I had a higher-dose (five- to 10-milligram) THC edible, I felt friskier and enjoyed sex more, which was a marked improvement on my usual late-forties state of rarely feeling frisky at all. It actually made such a difference that I now often pre-game with my special gummies whenever Jason starts cleaning the kitchen with uncharacteristic cheer, a sure sign my marital shag bill is imminently coming due.

I’d heard plenty about using weed to treat issues like sleep, pain and anxiety, but not much about using it to jump-start a sputtering libido or make sex more intense. Was I making it all up?

“You’re not imagining it,” says Dr. Richa Love, a family doctor and cannabis expert in Calgary, though she admits she too was skeptical when a patient first confessed she used it for sex. “I was like, ‘Sorry, that’s not a real reason. That’s like asking me to prescribe you alcohol for sex.’ I was shocked.”
Fast-forward several years, a couple of hopeful studies and lots of anecdotal reports from patients, and Love now has her own line of CBD cannabis products (Bloom by Dr. Love, but it’s not available in Canada), and she regularly prescribes cannabis to help women — in particular, peri- and post-menopausal women — who complain about things like lack of desire, painful intercourse and difficulty orgasming. It’s not a magic bullet, and it doesn’t work for everyone, but Love is glad to finally have something to suggest to patients who have no other serious underlying medical issues causing their sexual dissatisfaction.

(Related: The Dos and Don’ts of Using Cannabis to Improve Your Sex Life)

“As a physician, I can do the whole psychosocial aspect, but there was very little actual treatment I could offer,” she says. “That’s what I love about endocannabinoidology — it offers alternatives for people we don’t have a lot of options for.”

There are high concentrations of cannabinoid receptors in the parts of the brain that control sexual function, and proponents say weed can enhance sex by increasing blood flow to your erogenous zones, reducing pain and anxiety, helping with relaxation and supercharging the feeling of being touched.

There’s a potentially massive market for these products, and brands know it. While the Cannabis Act prohibits companies from making any health claims for their merchandise, that doesn’t stop consumers from doing their own research — energizing sativa-based cannabis strains with limonene terpenes are particularly loved for their “aphrodisiac” properties, and ones with myrcene are known for giving a warm “body” high — or reading between the lines of carefully named products. Because, let’s be real: Nobody seriously believes that Dosist’s Arouse vape pens hope to arouse your interest in Brutalist architecture, that Wink’s Wedding Cake flower exists to satisfy your sweet tooth or that Latitude’s Sex Pot Intimacy Oil is going to be used to moisturize your cuticles.

But how much actual evidence is there that cannabis can improve sex for women? The short answer is not much. The long answer is more complicated.

While cannabis has been used for thousands of years in traditional medicine, the body’s endocannabinoid system, or ECS, was only scientifically discovered in the 1990s. This means researchers and medical practitioners are only beginning to understand how cannabis interacts with human bodies and, in particular, how it interacts with the hormonal fluctuations in women’s bodies. And even if we put aside for a moment the issue that what qualifies as “good” sex (a more robust libido, more orgasms, better orgasms or just being left alone with a good book already, goddammit?!) varies wildly between individuals, research on women’s sexuality in general is thin on the ground, never mind research that focuses on women’s sexuality and cannabis.

There have been a couple of positive recent studies. One published in 2020 in the Journal of Sexual Medicine found that women who used cannabis had better Female Sexual Function Index scores; a 2019 study, also in Sexual Medicine, concluded that women who used cannabis before sex reported higher sex drives, better or more orgasms and a decrease in sex-related pain; and a 2017 study in — you guessed it — Sexual Medicine found that people who used pot had more nookie than those who didn’t.

While this all sounds promising, none of those studies prove that weed use causes better sex, but merely that there’s a self-reported correlation.
Love also stresses that the extreme specificity of each woman’s body and sex life affects how — or if — she’ll benefit from using cannabis to improve things in the boudoir, and that it’s still very much a trial-and-error approach as to which product, dosage or method of ingestion will work in any given case. She couldn’t tell me, for instance, why I personally find edibles so useful in this department but flower is a total bust, but she says she’s seen the cannabis format make a difference before. She had one 48-year-old woman come to her complaining that she was rapidly losing interest in sex with her husband, and while the cannabis drops Love had given her previously helped with some menopausal symptoms, including hot flashes, they were doing nothing for her sex drive. So Love suggested vaping instead.

As for the love shack at chez Rumack, weed has been an unexpected boon, but it’s by no means foolproof. There are always times when nothing will change the fact that I’m too tired or still mad about the dishwasher or would really just like a foot rub, and different products don’t always deliver the kick-start I’m hoping for. But when it works? Those BBC quiz shows don’t stand a chance.