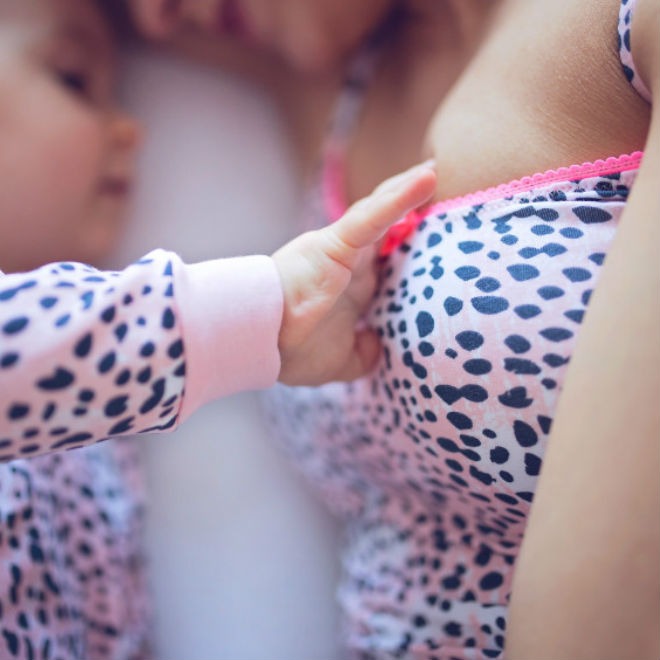 Breast pump, breastfeeding, husband, baby… Here’s what deputy editor Leah Rumack has to say about how everyone’s after her rack.

“Honey, you know I’m not good at… these… technical things!” I sputter, on the verge of tears.

“Here’s the thing. I don’t have BOOBS,” says my husband, Jason.

“Just put it together!” I snap, thinking that his fix-it man position in the household clearly extends from the computer to the breast pump that’s currently in several baffling Ikea-esque pieces on our dining room table. Our newborn Ben shrieks, red-faced, in the background about how he’s starving and can’t you idiots get your acts together before I call the neighbours and ask them to take me in?

Jason huffs and puffs and struggles with the instructions. Eventually he gets me strapped into my spanking new, super sexy, hands-free double breast pump. Little bottles are hanging off my nipples and a complicated network of straps and a painfully practical nursing bra hold the whole contraption together.

We stare at each other. Remember how we met at an after-hours party and we used to make out in the street and go for leisurely brunches after leisurely Sunday morning sex? This, my friends, is where it all ends up. As something that looks like a scene in a movie about sex in the future gone wrong.

Jason breaks the silence — “I need a drink.”

I never thought about my boobs much before. They were there, they were reasonably perky, they looked cute in lavender lace. But after years of being merely decorative, they eventually lived up to their evolutionary destiny by laser pointing themselves in the direction of a male enthusiastically enough that he decided to buy the cow even though, frankly, the milk was already pretty affordable.

And then Jason and I made baby Benjamin. And then baby Benjamin took my boobs. Or rather, he and the various breast pumps that came with his arrival took them. In short order, someone or something was always pawing and sucking at me. And then as my poor, once lovely breasts were being slowly drained of their will to live by their new job at the dairy farm, Jason wanted what was left over for the Husband Entertainment Hour.

Honestly. Everyone. Get off my girls.

Maybe it all wouldn’t have been so bad if breastfeeding hadn’t started out so poorly.

“Do you want to try and nurse him now?” the nurse asked, as I lay nauseous and semi-conscious after my C-section. This was my moment. This was when my darling first baby and I would stare lovingly into each other’s eyes, and he would coo and cling to me and we’d be in love forever. I awkwardly lifted Ben up to my nipple. He tried to grab it with his tiny mouth and failed. And failed again. And then he got mad. And he continued to fail and get mad for most of the following two months, to the point where whenever I brought him to my breast, he would start to scream and writhe and push the horrible, mean, barbaric booby away.

“You have to try for just five minutes, just five more minutes!” I’d beg. All of this initial #breastfeedingFAIL meant that, to make sure Ben got as much breastmilk as possible, I was semi-permanently attached to a pump for the first few months of his life. So there was Mama Cow, sitting on the couch, pumping. And let me tell you, there’s nothing hotter than a woman whose girls are being suctioned by a pump that sounds like a hee-hawing donkey while she tries to focus nonchalantly on Entertainment Tonight. Meanwhile, Jason was the one happily doing most of the actual feeding (and bonding) with Ben. Ben preferred Jason because he had the delicious milk in the wonderful bottle. And he didn’t try and force him to nurse like that Cruel Other One.

This wasn’t working out the way I’d planned. I had to wake up every three hours to pump. I had to buy a portable pump and do it in the car (while Jason was driving, not me!) and just pray I didn’t traumatize other people on the highway. I had the double whammy hands-free pump attached to me so often that more than once I forgot that I was mid-pump and opened the door to get the newspaper. My neighbours have never looked at me the same way since.

Then something magical happened: Ben suddenly decided that he wanted to breastfeed after all. But just some of the time. When he was in the mood. So now it was half pump, half baby all the time. I’m not really sure why I bothered with shirts, the ta tas were out so often, catering to all their various needy mouths. And then came The Hand. The hopeful husband hand, sliding over the edge of the bedtime cuddle and giving the left breast (or was it the right?) an optimistic inquiring squeeze.

Really? REALLY? My boobies were tired. And grumpy. They wanted some “me” time.

Pump, baby, husband — enough! Two paramours my hooters could handle, three was just too much. Something had to give.

Fortunately for my marriage, and for Ben, it was the pump. As Ben became a more accomplished breastfeeder, the pump got used less, eventually ending up at the back of the supply closet with the toilet paper and the washcloths. I actually started to enjoy breastfeeding, with its cuddles and the milky thank-you smiles. I was even disappointed when, just before 11 months, Ben declared breastfeeding yesterday’s news with a combination of disinterest and a patented chomp-yank procedure that’s sure to get a boy weaned fast. I was sad to see our days of prescribed closeness behind us. Not sure Ben noticed however. Sniff.

Or maybe he did. One morning as we cuddled in bed and he guzzled from a bottle of big boy milk clutched in his chubby little hands, my nightgown fell open, revealing one of his long-forgotten friends. He dropped the bottle and a huge grin spread over his face. Then he reached over, pinched my nipple and twisted it with a maniacal laugh. Now that’s love.