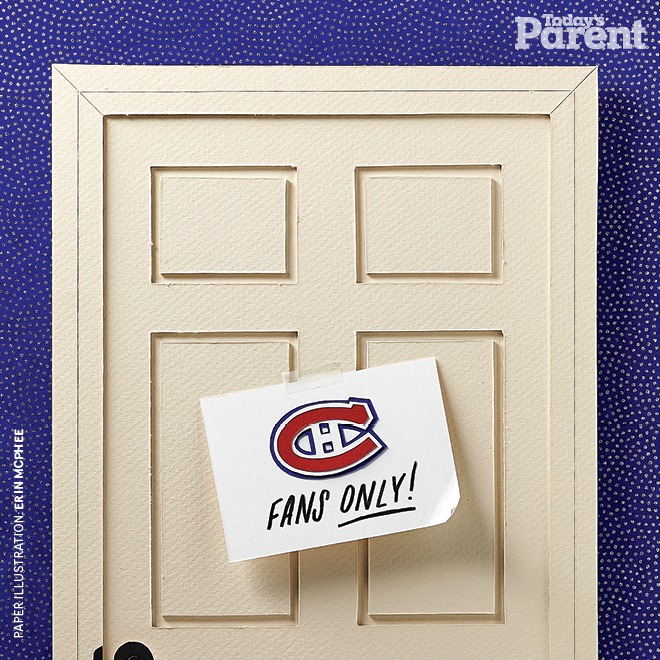 Deputy editor Leah Rumack gets left on the bench by her hockey-obsessed preschooler.

I contributed exactly zero hockey DNA to the creation of my now-three-and-a-half-year-old hockey freak son, Ben. I come from an all-girl household, and my dad was never into hockey. I never even had a boyfriend who liked hockey until I met my husband, Jason. But now, come October 8, Jason and The Hockey Monster We Spawned will be donning their Montreal Canadiens jerseys and cuddling up on the couch in front of the TV for six months, while I grumble, ignored, in the background. How did this happen? Like with most things, I blame Jason.

While he’s a big-city boy now, Jason comes from a small town and a hockey-crazed family (his great uncle, Harry “Apple Cheeks” Lumley, was an NHL goalie and is now in the Hockey Hall of Fame). Jason wasn’t much of a player himself—too busy having long hair and glowering while listening to The Cure—but he escaped Owen Sound, Ont., with his hockey fanatacism intact. Hockey is not optional there. Hockey is life.

I remember the day we left the ultrasound clinic, after discovering we were having a boy. Jason sighed heavily.

“Hockey is so expensive,” he moaned.

“He doesn’t have to play, you know,” I offered.

Silence. I should have known the battle was lost right there.

Ben started begging to wear Jason’s Guy Lafleur hockey jersey when he was two. (We soon got him his own Canadiens jersey—P.K. Subban, number 76, bien sûr). Ben turns our basement and backyard into the Bell Centre on a nightly basis, and his favourite bedtime story is when Jason recites all the teams in the NHL.

“I’m number 76, Subban, you’re number 10, Lafleur,” Ben will proudly tell Jason. (Also, there is hell to pay if Jason tries to watch a game without wearing his hockey jersey. This is incorrect. Do not try it.)

Periodically I remind my husband that I’m not planning on spending the next 13 years of my life at a rink. “If you want him to play hockey, you can take him yourself!” I inform him. Instead, I enjoy picturing my leisurely solo Saturdays while Dad hauls ass at 5 a.m. But what I fail to factor into that fantasy is the growing realization that if I don’t get on the ice soon, I’m going to be left on the bench. Alone. While Jason and Ben grow closer every day doing their “boy” things, like wrestling and being gross, they’re leaving me behind. Already Ben will tell me, apropos of nothing, “You’re not my best friend, Daddy’s my best friend!” I’m the odd woman out. Subban, number 76! Lafleur, number 10! And…?

I try to tell Ben I want to join in their nightly games, too, but he enforces a cruel caste system. He likes me to play the fans, and to cheer for his goals. (To perform this important role, one has to perch on the stairs. By no means is one allowed to sit on the couch. This is incorrect. Do not try it.) He also, sometimes, lets me be the Zamboni.

I spotted my big chance once Ben started playing soccer. Now we’re talking! Soccer is my game. I even used to play on a team with other grown-ups (unlike Jason, who only plays hockey with little kids—lame). So one afternoon when Ben is kicking a ball around the backyard, I tell him I want to play, too. He ponders my offer.

“OK,” he acquiesces. He grabs my arm and starts pulling me toward the grass. “Lie down!” he instructs.

“You can be traffic,” he says.

I better get myself a hockey jersey, and fast. I’m thinking Maurice “The Rocket” Richard, number nine.