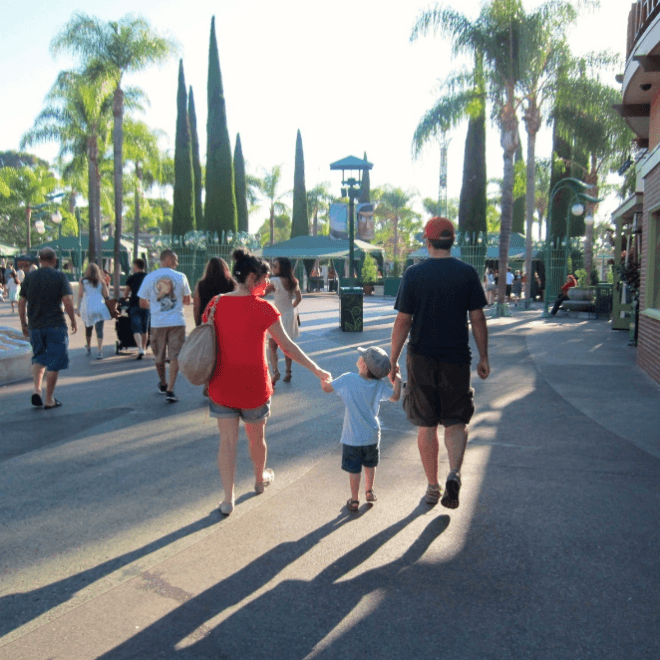 Deputy editor Leah Rumack takes her family to Disney for the first time—and it doesn’t suck!

When our son Ben was born, this was my professionally grumpy husband Jason’s “but I’m still cool” line in the sand. Disney was for, you know, Normal People. We’ll be global citizens! Our family travel will be clever, exotic and off-the-beaten path. We’ll take our now-three-and-a-half-year-old to the Galápagos Islands and show him the native flora and fauna and turtles and stuff, or to Paris to teach him about croissants and how to tie a teeny-tiny jaunty scarf and eat teeny-tiny bowls of bouillabaisse.

And then we ended up at Disneyland, and Ben ended up in a dress, and Jason was… happy?

“You’re so going to drink the Kool-Aid,” my colleague told me.

“You’re so going to drink the Kool-Aid,” another colleague told me. (What? Are these weirdos all drinking the same Kool-Aid? Why do they all talk the same?)

I blame us jumping the shark into the Disney universe on my friend Heather, a former hipster party girl turned civil servant/mother of three. She’s always been my gateway drug to the different stages of adulthood. (First Home, First Husband, First Baby, First Renovation—her snaky, spinning eyes lead me down the path to them all!) When she returned from a recent Disney World jaunt with her pack of under-five-year-olds, she reported: “It really is the happiest place on earth. It’s just so magical, I get tears in my eyes just thinking about it.” She rhapsodized about how they’d just thought of everything and how there were movies under the stars every night and how her kids just loooved it. I started to consider lifting the ban.

Ultimately we decided to go because of Ben’s shirts. He has five superhero shirts, and refuses to wear anything else (thanks for nothing, Junk Food line at Gap!) So, when we got the invite to go to Disneyland in California to meet his heroes—Captain America and Thor, two of the many characters there that keep, like, 62 percent of the actors in the state employed—even Jason couldn’t turn it down.

Oh yes, they were also promoting the meet-and-greets with ladies named Anna and Elsa from some Frozen movie or something, but we didn’t care about those.

Or so we thought. See, a funny thing happened on the way to Cinderella’s castle.

About two weeks before we were ready to leave, I realized that Ben hadn’t actually, um, seen any Disney movies. (Well, that’s not entirely true. I took him to Frozen when it came out, but he was only two and it ended very, very badly—something about me dragging him out of the theatre by his leg while he screamed, I dunno, it’s all a bit foggy.) So we decided we needed to turbo-educate him on the entire Disney back catalogue. We downloaded—I mean, bought! With real money!—all the classics: Jungle Book, Aladdin, The Lion King, Finding Nemo, Toy Story, Monsters Inc. and, of course, Frozen.

We may as well not have bothered. Because like every on-trend kid, Ben immediately wanted all-Frozen, all the time. He may have been late to the trend, but man did he go evangelical on our asses. By the time we boarded the plane, with all the superhero figurines I had so carefully picked out a month earlier stuffed in Ben’s backpack, he only had eyes for Elsa and Anna. Of course once we touched down he lapped up the rides, the Lego store, the treats, the monorail, the amazing daily (wtf?!) parades—but this trip was all about two things:

1) meeting his beloved heroines, and

There were a lot of little girls wandering the park in (frankly fabulous) Elsa dresses. Eventually Ben couldn’t take it anymore. He grabbed one unsuspecting five-year-old’s arm. “Where did you get that dress?” he demanded.

We took him to the big on-site store, telling him he could pick out two things. I snuck a peek at the price tag on the Elsa frock.

“Sixty-five dollars!” I screeched. “There’s no way I’m paying $65 dollars for a costume!” I figured that, oh, no problem, if he really, really still wants it I can just pick it up at the Disney Store back home. (I discovered quickly that this was a complete rookie error, and that there was a very good reason for all the “There is a limit of five Frozen items per customer” signs posted around the store, and that I would soon find myself madly searching the Internet for someone—anyone—who would sell me an Elsa dress in size four… but I digress.) A T-shirt. He could have a T-shirt.

“What about an Iron Man shirt?” Jason suggested helpfully, squinting at the mostly frilly and frothy Frozen merch.

“Daddy, you can get an Iron Man shirt,” Ben said. “I’m getting an Elsa shirt.” And that, my friends, was that.

The only thing left to do was to show Queen Elsa his new sartorial allegiance.

“Did you set the alarm?” Jason asked me, panicked, the night before our character meet-and-greet. “If we miss Elsa and Anna, there’s going to be hell to pay.”

As if we needed to set an alarm. Ben was up and dressed in his Elsa shirt by, oh, four in the morning. We’re whisked over for our semi-private meet-and-greet, a lucky perk since apparently there’s often a long line of dads holding spots in line for hours.

Anna and Elsa were holding court in a small ski chalet-style room. We inch our way in. This is Ben’s moment! This is the adorable photo op where he will do something darling like try and kiss Elsa or bow or try to talk to her about her fashion!

But he’s completely star-struck, and can’t even bring himself to look at them. But we did get this family photo-for-the-ages:

As we ride the Ferris wheel on our last night there, I look around with a dumb, Kool-Aid- infused smile on my face, thinking Kool-Aid-y thoughts: “Gosh, everything is just so clean and beautiful, and the rides are just so amazingly detailed, and it’s like being transported into another universe, and oh, my god who am I?!”

And now, we wait with the rest of the normal people with bated breath for the opening of the just-announced Frozen attraction at Disney World’s Epcot Center in 2016. (Frozen mini maniacs can satisfy their jones in the meantime at Disney World, where, starting November 5, 2014 and running through the Christmas holidays, Queen Elsa will be turning Cinderella’s palace into an ice castle every night, natch, or visitors to Disney’s Hollywood Studios can rock their best “Let it Go” at a Frozen sing-a-long.)

One of the amazing—like, truly amazing, in the real sense of the word—things about parenthood is how it’s so full of things that you never expected. Like that you’ll think that Disney was fun. Like your kid will tell you he wants a Frozen birthday party and that he’s being Elsa for Halloween, and that his father is going to be the reindeer Sven, and that you’ll be scouring the stores for antlers and teeny-tiny blonde wigs and cursing the day you didn’t buy your son that $65 dollar dress at The Happiest Place on Earth.