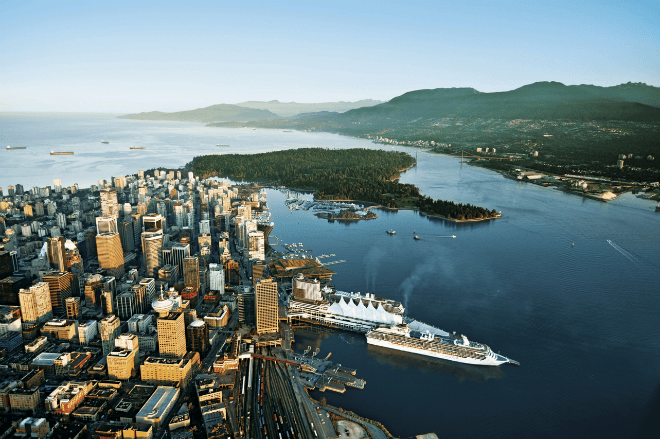 There’s tons of fun reasons for families to travel to Vancouver.

Vancouver has come a long way from being a place where the roads are paved with patchouli and you had to be wearing a North Face fleece to be allowed past the security gates at the airport. An explosion of innovative restaurants, cool hotels and an influx of mad real estate dollar dollar billz has turned Van into the perfect getaway for families looking for a big-city-experience and a fun-outdoorsy-paradise all in one. Tucked between the Pacific Ocean and the mountains, the temps are mild all year round (though you might want to bring an umbrella or two) and the trees are HUGE.

You can’t talk about Vancouver without talking about Stanley Park. This massive oasis in the heart of the city has so much for families to do—including four playgrounds, a waterpark, an outdoor pool and two beaches equipped with washrooms, parking and concessions stands—that you could easily spend days there. And that’s not even including the on-site world-famous Vancouver Aquarium, where you can see all manner of exotic species like belugas and sea otters. (Be sure to pick up a Narwhal stuffy at the gift shop, because, really, where else are you ever going to be able to get a Narwhal stuffy? My kid named his “Swimmy.” He’s such a poet.)

Word to the wise, however, Stanley Park is big. One of the best ways to get around (and an iconic Vancouver activity) is cruising around the Seawall on bikes. We rented ours at Cycle City Tours, where they had a great collection of baby seats, little-kid bikes and bike trailers. I was nervous about the short ride through the city streets to get to the Seawall with my five-year old peddler, but Vancouver is a city that has truly gotten cycling right. Between the separated bike lanes and the generous network of bike trails, we never felt unsafe. Riding around the Seawall with it’s amazing views of the ocean was definitely a highlight of our stay, but be warned—the trail is one-way only (ie. you can’t turn back!) and it’s 9 kilometres, so plan accordingly. Another popular activity for families is hopping on an Aquabus and cruising over to artsy Granville Island for lunch. You’re taking your life in your hands, however, if you go to the Kids Market—it’s almost all toy stores, plus a kids’ costume shop, hair salon and arcade. There’s a playground and water park right next door if you need to hose your kid down afterwards from all the excitement.

Rainy day? Hide out at Science World, The Beaty Biodiversity Museum or head to the FlyOver Canada exhibit, a super-popular attraction that simulates flying over the whole country (Kids have to be at least 40 inches tall and they recommend that preggos don’t ride, though).

Everyone will love the slightly out-of-left-field brunches like Green Eggs and Ham and Red Velvet pancakes at the hip Jam Café (but get there before 9 if you want to avoid a lineup!). Stop for Neapolitan pizza and award-winning gelato (toasted pecan and Quebec maple syrup flavour, anyone?) at Bella Gelateria Yaletown. Hot ticket resto Nightingale in Coal Harbour offers cool Canadiana for grownups but doesn’t blink twice at pint-sized diners. And for some of the best Italian I’ve ever had, make the trek out to Fraserhood to go to Osteria Savio Volpe. You’ll start to wonder where the h the cab is taking you (the hood is…in progress…) but more affordable living in this gentrifying area means that it’s full of rad young families who make this delicious joint their local.

While there are a dizzying array of accommodations in Van (for an affordable option that’s good for families consider the Times Square Suites). But if you want to live for a few days like someone who just flipped a house in the smoking hot Vancouver real estate market, consider checking into The Rosewood Hotel Georgia. Little guests can bask in the delights of the Rose Buds program, which includes kids’ room service menus, teeny tiny slippers and robes laid out at turndown and, of course, nightly surprise treats! They also offer in-room baby proofing and have loaner cribs, diaper pails and baby monitors, plus you can book a Mary Poppins through their babysitting services. The historic hotel (don’t miss the beautiful indoor pool!) is smack dab in the heart of downtown, close to both Stanley Park and the shopping district. It’s also conveniently right next to the Pacific Centre South shopping centre, where picky eaters can easily be satisfied at the large food court.