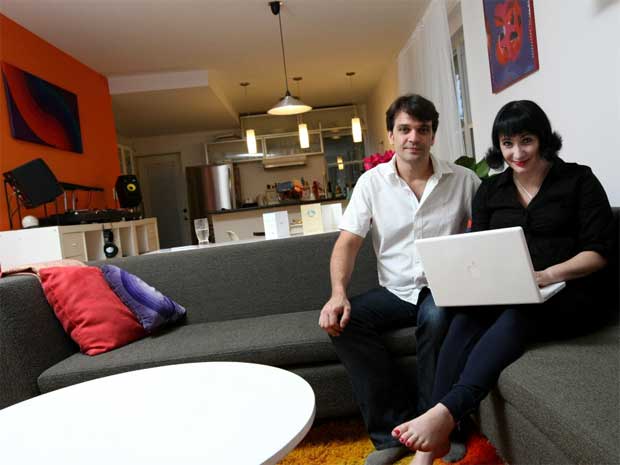 We managed to survive a year-and-a half of being battered and repeatedly heartbroken by the galloping Toronto housing market. Together we got through — or rather, got extremely adept at — losing nine bidding wars for houses we thought were merely OK, and grew so defeated that when the house we finally did get came on the market, my husband, Jason, could barely summon the will to walk in the door.

And then we got it.

And then we almost got divorced.

It wasn’t the house’s fault. It was the couch.

When I sold my small loft to move into Jason’s rental a couple of years ago, I essentially inherited his aesthetic, which, surprisingly as far as most of the men I know go, was extremely specific, even bordering on obsessive. Verner Panton pillows, chair, drawings and textiles? Check. Groovy 1970s-esque multi-coloured shag? Yeah, baby. Vintage rip-off of Eero Saarinen’s tulip-base kitchen table and chairs? You bet your sweet 1960s Finnish architect ass.

The only thing I brought was my very comfortable, very average, very beige, Ikea couch. He considered it a complete blight, like a swarm of locusts had descended on his disco party and devoured all semblance of good taste in one vicious chomp. He hated that couch, but during the time it took us to find a house, I wouldn’t acquiesce to buying a new sofa, convinced that the moment we did would be the exact second we got a house that it would definitely not fit in. So we waited, and he suffered (not in very much silence I might add) and he blamed me. Daily.

“I want a couch that if it were a car, it looks like it would go fast,” he would explain helplessly. I just wanted a couch to collapse on while watching True Blood. Once we finally acquired our new house, guess what the first purchase on the list was? A couch.

A perfectly nice sectional from any number of retailers was apparently out of the question. “I don’t want a boring (insert expletive here) SQUARE couch!” Jason would scream after I sent him link after link of couches that I deemed acceptable.

“A couch doesn’t have to be a design element,” I sputtered. “We have everything else — the art, the rugs, the furniture — for that! It just has to be comfortable!”

Where was my father when I needed him? My colour-blind father who happily let my mother make all the decor decisions in the house because that is for ladies? Gender equality is the worst. Thing. Ever.

I cruise the websites of furniture stores that Toronto Life Home guide implies are cool and maybe affordable and do find truly amazing, gorgeous, colourful, not totally square design-y couches. Problem solved! I call one King West purveyor of high-design seating to inquire. The miffed designer guy on the other end of the line corrects me on my pronunciation of the brand, but I forge bravely ahead.

“Great!” I say brightly, pretending to furiously scribble numbers down on my scrap of priceless parchment from the Dead Sea Scrolls I just keep around for you know, stuff.

Next, we find a less precious, modern stiff-backed number at a hip Queen West furnishings store. I perch on it hopefully. It’s … OK. Not exactly what I would call inviting. I drag Jason to Crate & Barrel over his protestations that this was clearly evidence that his life is over. Nope, none of those comfortable couches will do either. We start to despair that the détente will ever come to an end.

It’s a Craigslist listing for a vintage Herman Miller Donald Chadwick modular sectional, listed for a mere $1,200. And the sellers? They live down the street from our new house! The universe loves us after all!

“It’s meant to be, baby,” says Jason, stuffing a blank cheque in his pocket as we go over to see it. “I’ve been obsessed with this couch for years.”

We meet the couch. It’s been recovered in jaunty purple fabric. OK, I like purple. But two problems — it’s a modular “S” system, and the pieces for sale here, no matter how we arrange them, look at best like a slightly curvy worm. Which might work in the public waiting rooms it was designed for, but not so much as the only seating in an open-concept room that is your entire living space. Also, it’s only about a foot deep, which makes “sitting” on it an exercise in extreme perching. And there is also an oh-so-clever undulating crevice right where your low back hits the couch. In short, its pretty, but about as comfortable as cuddling with a crock pot. Jason is besotted.

I try again. I lie down.

“You realize I’m pregnant, yes?” I say as I weeble, then wobble, and finally face-plant directly into the oh-so-clever crevice. “Where is our future toddler sitting when he watches cartoons?”

“Are you kidding? A kid would love that couch.”

“That’s OK, I can find a good divorce lawyer.”

It’s a no go, but the Herman Miller continues to haunt us. I peek over his shoulder to spot e-mails entitled “Look what Leah won’t let me have!” He sulks for days and stomps around looking exhausted. “What’s the matter with you?” I snap.

“I was up all night thinking about the couch,” he says. “I’m going through the stages of grief. I think I’m at anger.”

I suggest trying Crate & Barrel again, pointing out helpfully that their sofas have washable slipcovers. His jaw sets.

“Don’t look at me like I’m trying to ruin your life!” I say. “Because that’s only my secondary goal!”

He turns on his heel and stalks away. “Die,” he mutters.

Later that night, he crawls into bed sheepishly. “Don’t worry darling, I won’t resent you forever,” he says. “One day I’ll die.”

“Just think, baby,” I say, “it could be so much worse. I could like French provincial shabby chic.”

“If you liked French provincial shabby chic,” he shudders, “I’m not sure I would have kept dating you.”

We end up getting the stiff-backed modern number from the hip Queen West purveyor of aspirational furnishings. Neither of us loves it, but nobody hates it either, so that, at this point, seems a triumph. The morning after we sign on the dotted line, Jason turns to me sleepily.

“Honey,” he says, “I know it’s the right couch because last night I had a dream they had to take the engine out before they parked it in our living room.”